Talk on Role of Women in Resurgence of Hindu Dharma 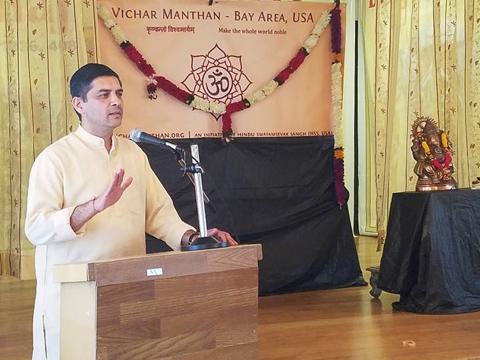 The arrival of spring in California not only brought us pleasant weather, and the bloom of tree,  it also brought Shanta Akka from our Bharata Desh.    Invitations to Vichar Manthan with Vandaniya Shanta Kumari Ji on “Role of Women in Resurgence of Hindu Dharma” went to all denominations of Indian diaspora, with the day and time of the event was on Tuesday, March 31, 2015 6 to 8pm.

When the volunteers of the event busy setting up the stage, attendees started to trickle in filling the hall of Sunnyvale Hindu Temple, some directly coming from work, some with family, and some with kids.   The overall ambience of the room was cosy, and even the little kids were comfortably entertaining themselves in the hall without any fuss.

A brief samiti presentation introduced Vandaniya Shanta Kumari, fondly known as Shanta Akka, as the Pramukh Sanchalika of Rashtra Sevika Samiti, and the Rashtra Sevika Samiti organization, which was founded in India in 1936, to instill the values of nationalism and character in women, has now grown to every nook and corner of India with over 3500 chapters in the country and over a hundred and fifty thousand dedicated members of all ages and walks of life, and it is the largest women’s voluntary organization in the world.

After a brief introduction to VICHAR MANTHAN,  Shanta Akka’s speech grasped everyone’s attention and imbibed the audience in intellectual stimulation.   The audience followed Shanta Akka’s speech with great enthusiasm marked with inspiration, emotion, emphasis on assertion, thought provocation, and was clearly entertained by the gushing sense of humor with some burst of laughter from the audience.   Shanta Akka asked us to adopt “Practicing is preaching” as the best way to teach Hindu culture to our children, moreover,  conveyed the importance of sticking to a daily schedule, self discipline, and  being a role model to them, as the other key aspects to follow in our life.  Shanta Akka’s emphasis on practicing Hindu traditions and cultural values with great deal of assertion among Indian diaspora living in the Karma Bhoomi of contemporary world was very much felt among the audience.

Two hours passed without any sign of appetite reminded of a verse in Tamil, “செவிக்கு உணவில்லாத போழ்தில் சிறிது வயிற்றுக்கும் ஈயப்படும்!” — meaning “When food for thought is not available through instructions from the learned, The stomach too may be provided some food”!  A simple sumptuous meal prepared and served as dinner by the volunteers after the conclusion of the event, preceded by a beautiful bhojan mantra, filled our stomach too.

A  special day to remember : We utilized this opportunity to launch “WWW.VICHARMANTHAN.ORG” website by our special guest speaker, Shanta Akka.  Vichar Manthan is an open forum for intellectual debates, discourses, discussions on a wide variety of topics, including, but not limited to, philosophical, spiritual and sociocultural aspects of Hindu Dharma and Western ideologies.