Sunday, 16th September, Chicago, IL: On the auspicious occasion of Ganesh Chaturthi, two Chicago areas Balagokulams conducted the Ganesh Puja by kids. Hindu Swayamsevak Sangh’s (HSS) Mundelein Balagokulam conducted the program along with Hindu Mandir of Lake County at the new inaugurated Mandir in Lake County, while the Naperville Balagokulam conducted its event at their newly established Balagokulam location at Eola Community Center in Naperville . It was one of the first experiments of this kind in the Chicago land area and judging by the response of the participants, it is likely to be an annual feature. A total of 400 Hindus, that included nearly 200 children, participated in the puja at the two locations. Most of the participants were dressed in traditional attire. At the Hindu Mandir of Lake County the participants were welcome with traditional Haldi/Kumkum (for the ladies) and Tilak (for the gentlemen). The participants were requested to bring along some of the Puja Samagri (Puja Items) and were supplemented with the remaining items by the organizers. 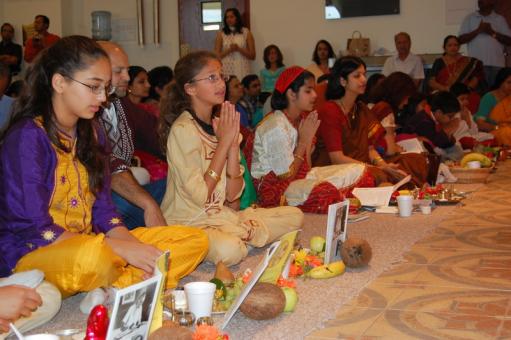 Lord Ganesha is considered the God of knowledge and wisdom. Praying to Lord Ganesha is believed to help remove obstacles in ones life. That is also one of the reasons Ganesha is invoked at the beginning of any new endeavor. Ganesha by the virtue of his interesting form and playful nature is a natural hit among kids. The Puja itself comprised of simple steps. The kids were explained the meaning of each step during the Puja. They were also explained the present day relevance of some of the rituals.

The event at Naperville was the culmination of a two week program that started with children making Ganesh Moortis (idols) at the Balagokulam, a week prior to the actual pooja. They then brought their Moortis the following week to perform the pooja. Parents at both the locations conveyed their heartfelt thanks for conducting the event. They could see their children actively involved in the Puja, performing each step with a lot of devotion. “I share the enthusiasm and energy of all those that attended and needless to say, that this auspicious event impressed everyone alike. Keep going and keep growing”, said Kshama Desai (one parent from Mundelein, IL ). “The purpose of this is to introduce the kids to the religion and just to keep them connected to the culture”, said Anu Desai of Naperville, who brought her 4-year-old son, Aayush Desai. While Nirmesh Patel (42), of Hawthorn Woods, IL had this to say, “I wish to congratulate you on what you termed the Ganesh Puja “Experiment”. The event was very well planned and executed. Your efforts went a long (way) in helping us to explain and show traditional values to my 10 year old daughter, Avni”.

For the kids, besides an opportunity to put in a collective effort along with other kids their age, the Puja served as a morale booster. It gave them the confidence of performing small tasks independently and successfully. “I did the pooja for the first time by myself”, said a proud 6 year old Avni Gandhi. The children performing the pooja ranged from 2 year olds to high school seniors.

Both the Balagokulams are relatively new in their respective areas and the event in addition to bringing together a large number of Hindus, served as an ideal means for introducing Balagokulam and its purpose to the local parents. One senior karyakarta (volunteer) nicely summed up the need and relevance of Balagokulams in the American landscape. “We believe America is not a melting pot. America is a salad bowl. Each ingredient has its own identity and quality”, he said. “Once they (children) know what they are, they can carry the good part and learn the good part from other cultures, and become good people. We want them to become good American Hindus”, he added.

Both the events concluded with darshan and prasad distribution. Pictures from both the events are available at the following links.

The event at Naperville was covered by Emily McFarlan of the Naperville Sun.