Birchwood Manor, Whippany, NJ – On Sunday, Sept 29th, 2013 New Jersey a glorious moment in the annals of Hindu events history when nearly 2000 people representing over 30 organizations joined hands in celebrating “Dharma and Yoga Fest”, a unique “once in a lifetime” event spreading the message of “Universal Peace Through Dharma and Yoga”. Spearheaded by Hindu Swayamsevak Sangh (HSS), Dharma and Yoga fest was held as the culmination of the year long festivities, in commemoration of Swami Vivekananda’s 150th birth year.  Such events are happening in 30 different cities across USA, spreading the awareness about Swamiji’s teachings and path of religious tolerance and brotherhood.

The event began at 11:00 am with a documentary on the life of Swami Vivekananda, prepared by 2nd Generation Hindus in America, and concluded at 7:30 pm with the recital of Ekatmata Mantra (Oneness Hymn) by over 1400 people in the Grand Ballroom of Birchwood Manor. After the video, over 200 people participated in step-by-step guided Saamuhik Ganesh puja. During puja, families sat on floor and Swami ji of the Krishna Vrundavan temple led the ceremony on stage. Every participant was provided with a small murthi of Ganesha along with puja material. The guests were then treated to a soul stirring, awe inspiring exhibition on Swamiji’s life and teachings before being directed to their respective tracks. Taking inspiration from Swami Vivekananda’s teachings, the entire event was set up in four parallel tracks, namely, Gyaan Yoga, Bhakti Yoga, Karma Yoga and Raja Yoga.

The Gyaan Yoga (The Way of Knowledge) track was a stimulating series of lectures with question & answer sessions in between.  The popularity of the track could be gauged from the number of attendees who chose to stand and enjoy the sessions in a packed room for over 3 hours. Six different speakers from various organizations gave inspiring speeches on Gyaan Yoga track.

The Raja Yoga (The Royal Way) track activities included presentations by professionals from Yoga Studios  and Reiki  followed by simple workshops for the audience. These sessions were not only informational but were designed to motivate people to practice yoga in daily life. There were about five such sessions for this track.  The entire Gyan Yoga and Raja Yoga track was emceed by Art of Living devotees.

The Bhakti Yoga (The Way of Devotion) track turned out to be a great success and having the young ones performing bhajans instead of pop or Bollywood numbers was an exciting change to be admired. About sixteen different chanting, bhajan and dance groups participated in this track, which were beautifully emceed by two volunteers of Hindu Swayamsevak Sangh (HSS.)

The Karma Yoga (The Way of Action) track  consisted of stalls belonging to various service, commercial and spiritual organizations including but not limited to Vishwa Hindu Parishad of America, Art of Living, Gayatri Parivar, and Patanjali Yogpeeth. The response from the crowd for booths and stalls was overwhelming.  As a part of Karma Yoga track one booth was dedicated to collecting bone marrow swabs and spreading awareness for donating bone marrow. 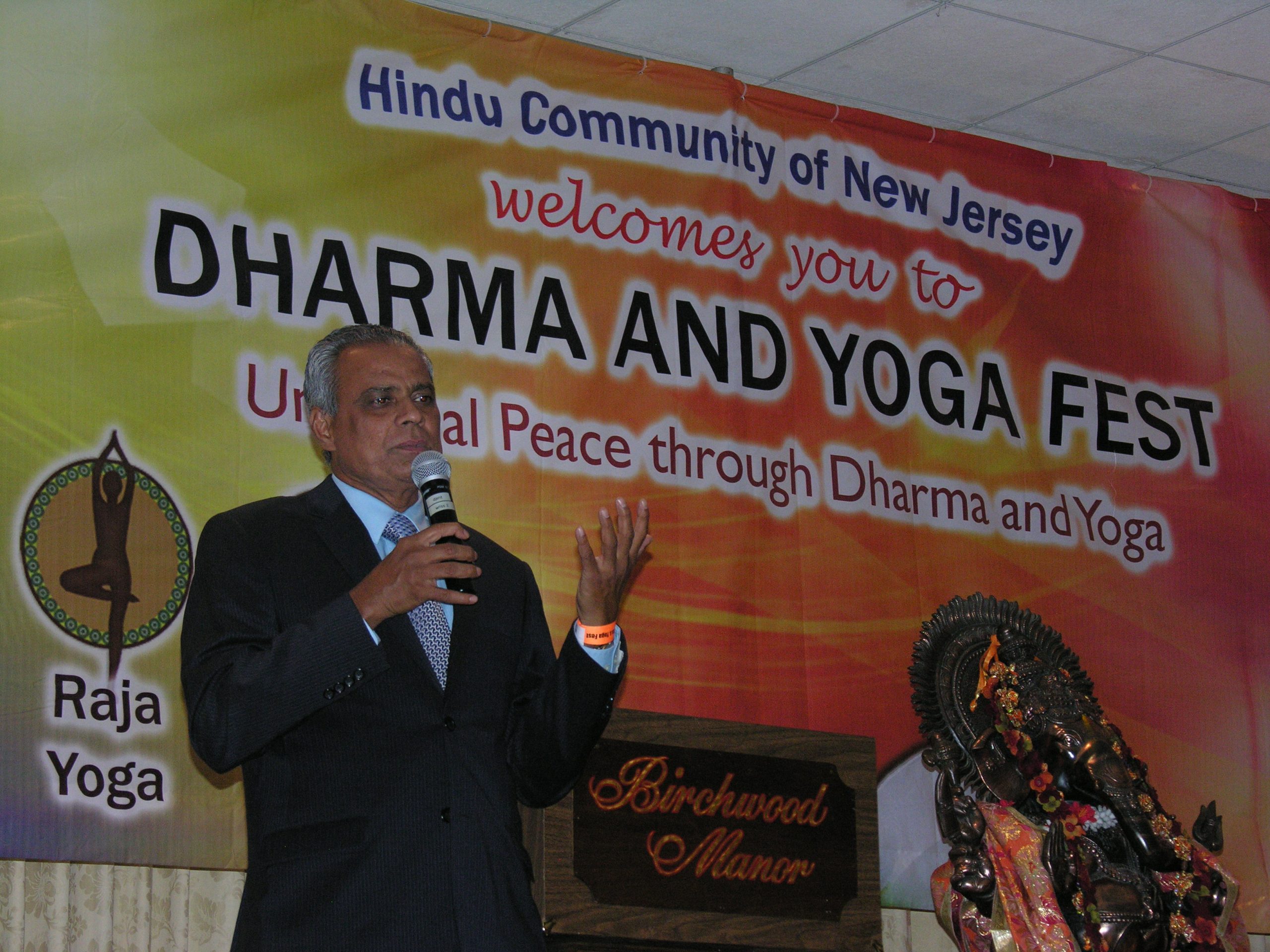 The program was graced with many public officials including the Mayor of the City of Parsippany, Counsilman and Candidates and an Assembly man of Indian origin Shri Upendra Chivukula. As one of the local councilman said, he had never seen so many people on this premises ever in his lifetime, sums it all about the program.

Overall, the attendees spent lot of time following the journey of this great monk of India by participating in various Yoga tracks. In order to keep the children engrossed while parents attended the session, a carnival had been set up as well. All the kids excitedly participated in fair to play games and win prizes through the day. In all, the environment was as karmically electric as Swami ji would have liked it to be.

Towards the end of the day, all paths converged to the auditorium where the stage was set for a grand conclusion. At 4:15pm the final culmination of the program, started with Bhajan Sandhya by Gayatri Parivaar. Around same time, Chief Guest, Swami Suguneendra Theertha ji and Keynote Speaker Yogrishi Swami Ramdev ji  were welcomed with vedic chanting into the hall. After that, a skit on Swami Vivekananda was performed by over 60 kids of HSS. The Skit was a grand success with everyone clapping loudly at every opportunity. Everyone was overjoyed by seeing young kids passionately conveying Swami Vivekananda’s teachings.

Both Swami ji’s gave great lecture on the need to follow life of Dharma and what is Dharma. Swami Suguneendra Theertha of Shri Krishna Vrundavana society explained importance of Sanskrit language vis-à-vis other languages in Sanskrit and talked about the Dharma and need of the Hour. Swami Ramdev ji was at his best and took the audience to different heights. He spell bounded entire audience for over an hour with his oratory. He talked about Dharma and why it is needed and exhorted everyone in audience to become modern day Vivekananda by imbibing his teachings in their life. He performed breathtaking yoga and breathing exercises  on the stage to the delight of kids and adults alike. The Dharma and Yoga Fest concluded with all present carrying the message of Swami Vivekananda on their tireless journey towards Divinity.

“It was indeed a life time experience, Hats off to all of the Volunteers.” – Panelist

“A big Om for entire team for a grand program meticulously planned and implemented. The kids and the skits were great.” – A parent

“From parking to vendors management, arrangements, stage management and especially the Grand Finale was such a befitting commemoration to the noble soul who spread Dharma and Yoga in East and West!” – A vendor

“A Hearty Congratulations to all the organizers.  Very enjoyable and educational day.  Extremely well organized.” – An attendee

Hindu Swayamsevak Sangh (HSS) is a non-profit Hindu cultural organization dedicated to preserving and promoting Hindu values amongst American society. It has around 150 chapters all over the USA. HSS runs weekly sessions for children called Bala Gokulam and for adults in the name of HSS chapters to teach Hindu culture, good values (samskaras), Yoga and meditation. All HSS chapters conclude with a prayer directed at the Supreme Being to attain universal peace among all communities.  More information on Hindu Swayamsevak Sangh and its activities can be obtained from http://www.hssus.org.