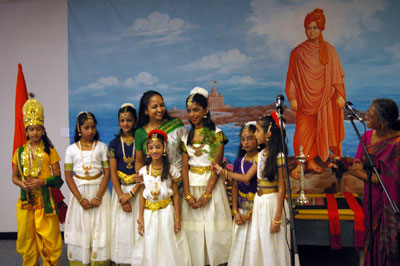 On August 11, 2007, a number of teachers, from music teachers to dance teachers, from karate instructors to math teachers, met at Keshav Smruti where they received an opportunity to learn the Hindu concept of a guru.

As a part of the Guru Vandana celebration, The Southwest chapter of Hindu Education Foundation, a project of Hindu Swayamsevak Sangh invited many teachers from the Houston community to attend the Guru Vandana Utsav.. Students, who attend balagokulams, or the weekly activities of HSS politely requested their teachers to attend Guru Vandana, where teachers truly experienced a unique event

To commence the Utsav, Acharya (teacher) of DAV Montessori school, Sri Sone Rao and vice president of HSS Houston chapter, Sri Subhash Gupta were invited to the beautifully decorated altar where they lit two silver lamps. Following this initial lighting, each teacher was invited to the front of the Keshav Smruti hall along with their students, where teachers followed suit and each lit a lamp. The lighting of the lamp symbolized the darkness they have dispelled and fire they have awoken in their students. After the lighting of the lamp, students offered bouquets of flowers to their teacher, which further conveyed the respect and love each student had for his or her teacher. Before returning to his or her seat, every teacher was given an introduction of his or her teaching profession by his students.

With all teachers recognized, the cultural portion of the Utsav commenced. Several kids, including Ayush Sharma, Nikhil Jaiswal, and Shiven Danayak, chanted shlokas (mantras), each shloka containing a meaningful message, honoring the guru. To explain the meaning of these shlokas, Subhash Gubba presented a short speech, on the role of guru in the disciples’ life. “The word Guru,” he explained, “can be divided into two Sanskrit words Gu and Ru. Gu means darkness or ignorance while Ru means the remover. Therefore the Guru is the one who removes darkness and ignorance, and replaces with light and knowledge.”

As to provide a visual demonstration of the significance of the guru, several students performed a well rehearsed dance, while other students, dressed in the attire of gurus and shishyas (disciples) from the vedic times, portrayed the relation gurus had with their disciples. One of the actors, Ayush, who represented Sage Dhoumya, in his white dhoti and long beard, was paired with his disciple Aruni, who was played by 5-year-old Ishan. Ayush commented on the preparation for his role, “I had fun with my friends every time we met for practice. I even learned the story behind Aruni’s devotion to his guru, Sage Dhoumya.” The roles were choreographed by Dr. Pramod and Usha Pathak. “Working with kids has always been something I’ve enjoyed,” Usha Pathak explained, “and with the parents’ support and kids’ enthusiasm, this cultural program was a success.” “The Hindu concept of guru has been present for thousands of years,” explained Dr. Pramod Pathak, a scholar of Indian history, “even today in the year 2007, we can learn from the examples set by our ancestors.”

For more information on HSS visit www.hssus.org or www.hindueducation.org for Hindu Education foundation.