No Result
View All Result
Home Health for Humanity

by hssadminuser
in Health for Humanity
Reading Time: 4 mins read
0 0
0

During the last two weeks, through the country from the San Francisco Bay area to Boston to Houston, mainstream Americans joined with Hindu-Americans in learning about and performing the yoga postures of “Surya Namaskar”, or “Sun Salutations.

Governor Brad Henry pronounced January 28, 2007 as “Yoga Awareness Day” for Oklahoma and Mayor Kathy Taylor did the same for her city, Tulsa.

During the last two weeks, through the country from the San Francisco Bay area to Boston to Houston, mainstream Americans joined with Hindu-Americans in learning about and performing the yoga postures of “Surya Namaskar”, or “Sun Salutations. The physical, mental and spiritual heath benefits of doing the Surya Namaskar were directly experienced by individuals from four to 70 years old at more than 100 centers throughout the United States from January 13 through 28. Local print media and local affiliates of ABC and NBC covered this innovative national project. 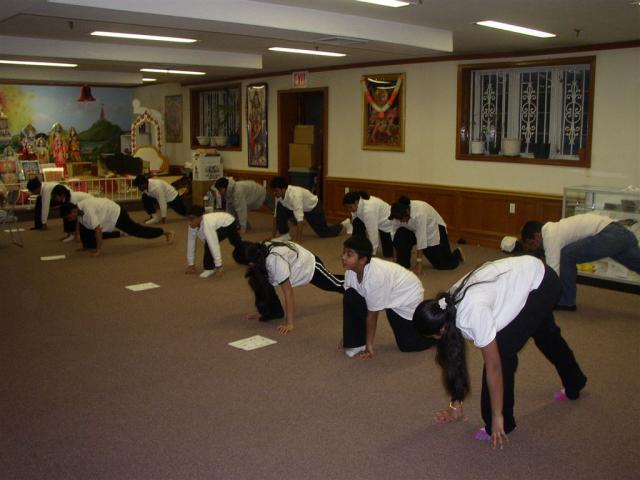 Each year Hindus worldwide celebrate January 14th as Makar Samkranti, a change of season and the day the sun enters the sign of Capricorn, or Makar. Makar Samkranti brings in longer days, thus the festivity symbolizes sunshine in life. To mark this occasion this year, from January 13th to the end of Makar Samkranti celebration on January 28th, Hindu Swayamsevak Sangh-USA (HSS), a non-profit organization, organized the Surya Namaskar yagnas. It brought together individuals and families, both Indian-American and others, many of whom had not regularly practiced yoga, at their weekly events all across the United States during the weekends. A number of the participants also practiced at home during weekdays.

This was an innovative campaign to raise health awareness using the ten-step yoga postures known as “Surya Namaskar Yagna”, or “Sun Salutations offerings”. Surya Namaskar is practiced in more than 40 slightly different formats all over the world. These are sets of well-balanced movements that stretch all the muscles in the body combined with constant breathing pattern and keep the body and mind healthy. 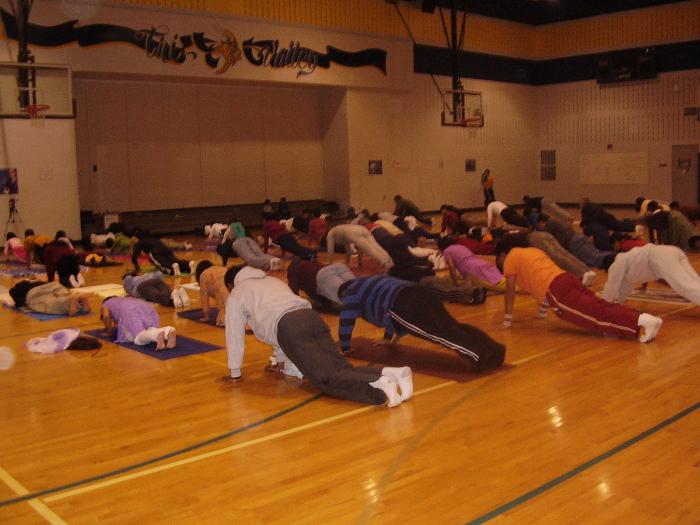 One of the participants, eleven-year-old Ayush Sharma, said, “I never imagined I could do 234 Surya Namaskars in less than four hours”. In New Jersey, 80 volunteers performed 6100 Surya Namaskars in a competition in 45 minutes.  In Texas a family of four started performing 52 Surya Namaskars each with a goal to perform 3200 during the yagna. In an Indianapolis temple more than 200 attended a Surya Namaskar presentation and later participated actively in the yagna. In Georgia and in Florida, 300 individuals, in Massachusetts 500+, and in California 700+ persons have started practicing Surya Namaskars daily.

Participants in the yagna have expressed their experiences and plans for continuing the practice. Some like Dr Lata Stead of Rochester, Minnesota, were interviewed on local TV. She stated, “Once we started, my kids and I were hooked. Before I started this I really didn’t think ten minutes of yoga was going to do anything because I already exercised a lot, but I’ve been very surprised by the results, Also, one of the things it teaches is patience and that’s a good thing with four kids!”
Nishank Trivedi says “everyone is so busy. We kind of neglect our physical health; so with Surya Namaskar, or sun salutations, all you have to do is take out ten minutes and do these postures and it gives you a full body exercise”.

“Prior to Surya Namaskar Yagna, I used to do exercise on treadmill. But now, 20 Surya Namaskars follow my treadmill exercise. Never in past I felt as good as I feel now. I experience renewed energy and flexibility in all of my body joints”, said Anita Rathore from Medway, Massachusetts.

Joel Brown from Florida said, “I think the Surya Namaskar Yagna is a great program that allows family and friends to come together and better themselves physically, mentally and spiritually. It’s a unique program because even after the event is over…doing Surya Namaskars on a daily basis continues”.

Vijay Pallod from Houston, Texas mentioned that after an accident two years ago, he was not able to do Surya Namaskar. But he tried again at the start of the yagna with his family. He continued this practice even with his travel to India and Kuwait during this period. He and his family will be continuing to practice daily.

Perhaps the oldest participant was 70-year-old Mallikarjun Shintri, CPA and yoga instructor, who did 195 in the Houston one-day marathon. Among the youngest was four-year old Pratham Rathi, also from Houston, who did over 200 during the period and plans to continue daily .

At the end of this project, many participants said that if they did not do Surya Namaskar any day for some reason (busy at work, busy at home or due to sickness), they felt incomplete and not good that day.
When asked about the successful completion of Surya Namaskar Yagna, National Project Coordinator, Dr. Siddhesh Shevade said, “Our biggest achievement for this project was to make individuals understand the easy cardio-respiratory training to the body that one can regularly perform in minimum time and space and with no equipment. Surya Namaskar Yagna, as a project, has concluded for this year, but we are sure that many individuals who developed this habit in the past couple weeks will make this individual sun salutation offering life-long.”

For all the details about the Surya Namaskar Yagna 2007 (SNY 07) including Resources, News articles, Photos and News Videos; please visit www.hssus.org/sny