More than 16,000 people poured into De Anza College, Cupertino, to be part of an exciting day, to celebrate the Hindu way of life. Hindu Sangam, a one-day grand cultural program aimed at displaying the various Hindu intellectual, cultural and spiritual contributions made over thousands of years, was organized by Hindu Swayamsevak Sangh with support from over 40 SF Bay Area organizations including Sunnyvale Hindu Temple as one of the Grand Sponsors. This event was organized on occasion of birth centenary of Shree Golwalkar Guruji.

The day started with a yagna (offering and prayer) for world peace on the background of September 11. Attendees then participated in programs that took place on eight parallel tracks. Ayurvedic medicine, cultural program, Dharma Vedika (religious philosophy), exhibition, Hindu theme park, Samskritam, Yoga, and youth activities. This was followed by a grand Ramayana play enacted by over 300 children. Shri. Mohan Bhagawat, General Secretary of Rashtriya Swayamsevak Sangh and the chief guest at Hindu Sangam, addressed the huge gathering and implored everyone to show unity in diversity. The day ended with Smt. Anuradha Paudwal entrancing the audience with her melodious music.

At 10.00 AM the parking lot was teeming with people where a grand stage had been erected just the day before. The air was filled with the chanting of ancient Vedic hymns and the smell of sweet incense. As a grand prayer offering was made to the One God, or Ultimate Reality, through the God of Fire, Agni, a somber silence fell over all present. This has been the way Hindus have been showing what they have eternally believed in, i.e. Vishwa Shanti or World Peace as they chanted the mantra, ‘lokaa samastaa sukhino bhavantu’. (Let everyone be happy . Let there be peace in the whole world.) 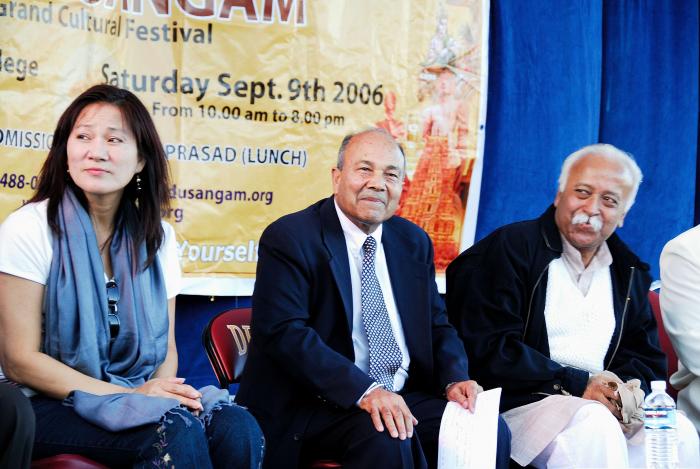 Ms. Cindy Chavez, Vice-Mayor of San Jose inaugurated the Parallel Track Programs and said that she was honored to be present at such a grand cultural event. The parallel track program options were so numerous that people had to make difficult choices. Programs ran in parallel tracks on different aspects of Hinduism such as Ayurveda . the traditional medicine of India, Yoga. the holistic science of individual health, Samskritam – the language considered to be created by the Gods themselves, and Dharma track on the Hindu dharma and philosophy. Those interested in Indian dance and music were treated to an exotic flair of color on the main stage as part of Kala Sangam.

The youth had excellent programs put together by youth themselves and with speeches by stalwarts of Hindu society. Children had a gala time at the Hindu Theme Park, participating in puppet shows, magic shows, face painting and visiting with Ramayana characters. Also at the venue were demos of self-care remedies and consultations by renowned Ayurveda practitioners.

The Yoga Sangam track was inaugurated with a Yogic dance by Sangita Das and her students, presented the Yoga philosophy in various forms. There were sessions on Pranayama techniques, Art of Living meditation techniques, and yoga for children. Shri. N.V Raghuram of sVYASA, the keynote speaker at the Yoga Track, emphasized that Yoga is a way of life which brings harmony at the individual level and peace at the universal level. The last session was Laughter Yoga by Ms. Robin Pollard, presenting different laughter techniques used for stress-reduction. 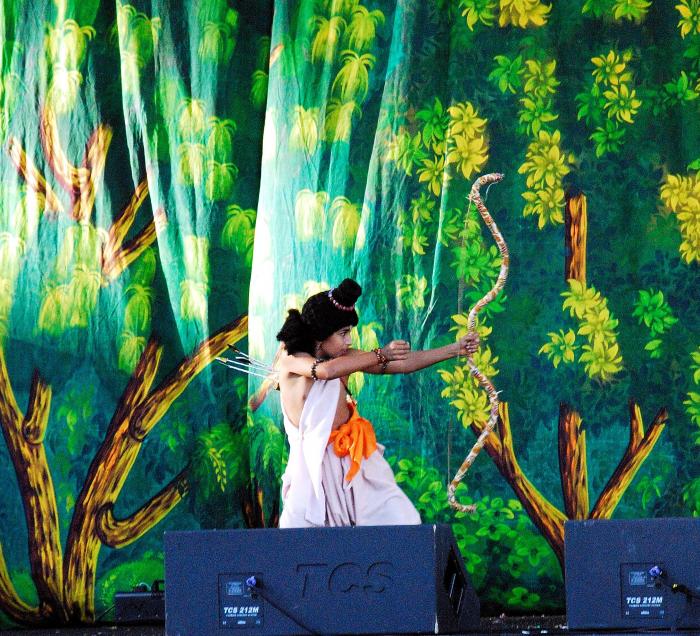 The Dharma Vedika, or Dharma track, dealt with the enormous Dharmic heritage of the Hindu civilization. Swami Paramahamsa Nityananda, founder of Nithyananda Dhyanapeetam, a worldwide movement for meditation and healing, defined Dharma as a way to connect with Divine and other individuals. Linda Johnson, author of several books related to Hindu traditions, recounted personal experiences with Swamis and Gurus and how she got over a debilitating disease with the help of mantras.

As the intellectual and spiritual dimensions got the requisite attention, so did the artistic dimension through the Kala Sangam. Folk dances with traditional, colorful costumes, were presented by groups representing different Indian states as well as Nepal and Fiji. Classical dances of various types were performed by Madhuri Kishor and the Natyalaya Kuchipudi dance school, Anuradha Nag’s Group (Kathak), Abhinaya Dance Company of San Jose (BharatNatyam), Jyoti Kala Mandir College of Indian Classical Arts (Odissi and Kuchipudi). Dr. Romesh Japra, Community Leader and Trustee of Fremont Hindu Temple, was the guest of honor at Kala-Sangam.

Not to be left behind, the youth had a series of exhilarating and dynamic set of activities in the Yuva Sangam. With the slogan Youth for Unity, Virtues and Action, youth aged 13 through 25 enjoyed dance, music and special presentations. Hindu Students Council (HSC) from UC-Berkeley and UC-San Diego chapters and Hindu Awareness Club (HAC) of Monta Vista High School presented some of the issues faced by Hindu students and the importance of maintaining one’s Hindu identity. While The Art of Living group presented a basic overview of Hindu astronomy, youth from BAPS talked about the inspiring movie .Mystic India.. Teenagers from East Bay Sai Yuva Group and HSS presented dance and music of India. 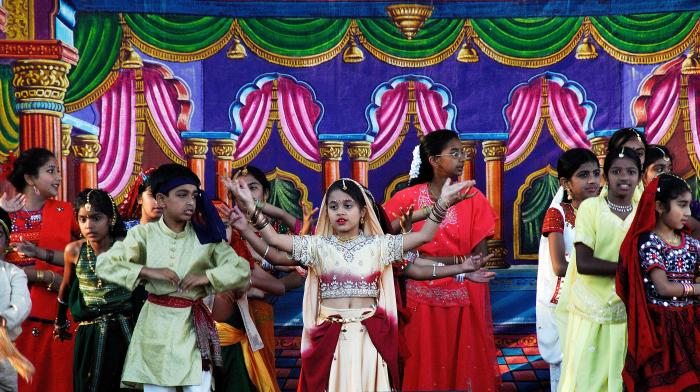 Samskrita Bharati volunteers helped organize the Samskritam track which featured short session where participant could learn to speak 10 sentences. Equally effective was a lecture by Dr. Uday Bhaskar Deekshit, a Samskritam scholar and a priest on the contemporary relevance of Hindu way of worship.
Children, through the Bal Sangam., found unending fun and entertainment in the Hindu Theme Park. Magic shows, face painting, mehndi, art and crafts and traditional games held them in rapt attention. Groups from Chinmaya Mission, Shri Chaitanya Ashram, and HSS, as well as Magician Steve, engaged many children with stories and activities, while hundreds more participated in drawing and shloka competitions. Even infants were not forgotten! A quiet room complete with snacks, milk, sleeping bags, and a TV playing favorite Indian videos gave much needed relief to parents with very young children. Adults dressed as characters from Hindu epics and freedom fighters met with the children, telling their stories. Along with the melodious kirtans sung by devotees of Shri Chaitanya Ashram, the atmosphere in the theme park was both fun and educational. 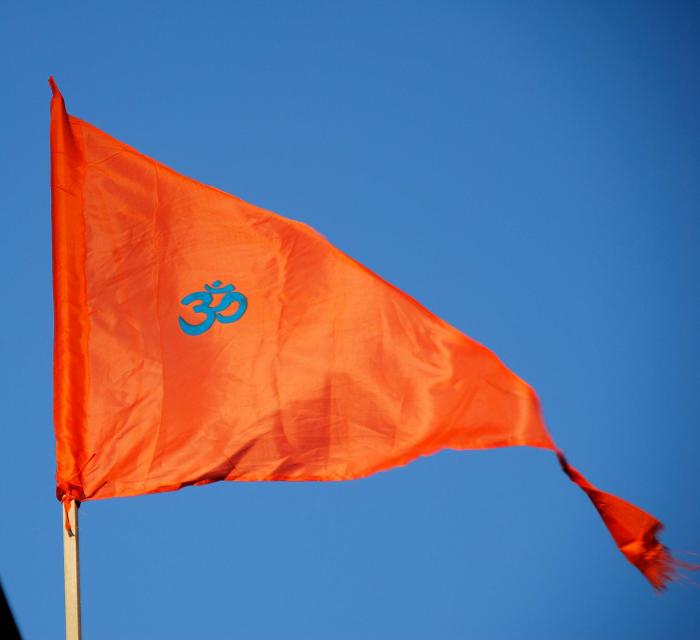 A sumptuous, free lunch was provided to all attendees. It seemed as though there was a never-ending supply of food, water, and soft-drinks thanks to Sunnyvale Hindu Temple, Swagat Restaurant and Vishwa Hindu Parishad of America. There were 70 booths at the event, some of them selling Indian jewelry and clothes. Many non-profit organizations found Hindu Sangam the perfect place to disseminate their message. A volunteer for Vedic Foundation commented, “I feel like I was at home. I was served lunch, snacks and tea. This was the best organized event.”

Later in the evening our hopes of tomorrow were encouraged when 300 children aged 5-15, enacted the Ramayana, the oldest great epic. Wondrous props and authentic costumes brought the story to life on the main stage as the packed audience watched in rapture and kept shouting Jai Shri Ram. and Shri Ramchandra ki jai.. 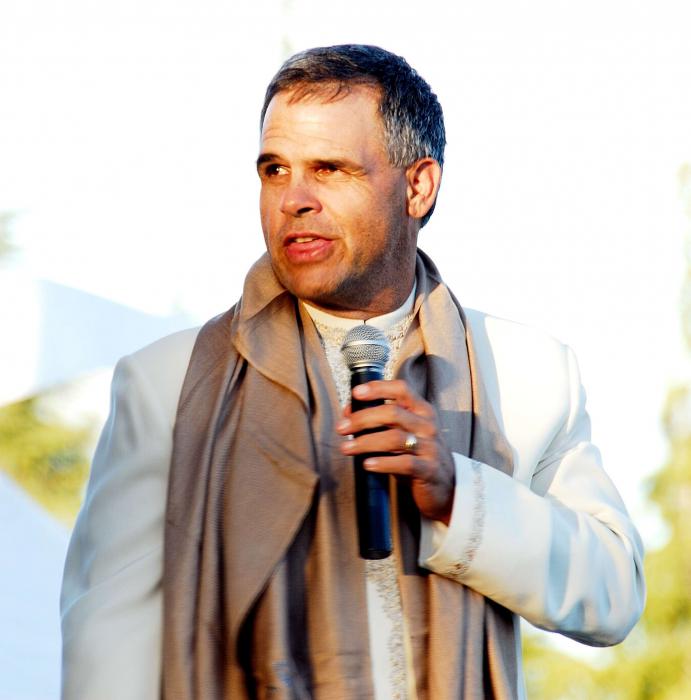 Mayor Mr. Richard Lowenthal of Cupertino, in Indian attire, said he was honored to be at such a gathering.Your grandfather and grandmother have given you a great gift of your culture and heritage. Today you celebrate your culture with your children and grandchildren. This evening is about celebrating India and celebrating your culture today in America. It is a gift from your ancestors that you are passing on to your children this way. Vice-Mayor Ms. Kris Wang also attended the grand event. The Mayor of Milpitas, Mr. Jose Esteves who was also a guest of honor said, .I respect you all coming together, celebrating your culture and asserting your existence in the American society. He also presented HSS with a plaque commending their work and invited Hindu Sangam back to his city.

The keynote speaker, Shri. Mohan Bhagawat, General Secretary of RSS was introduced by Mr. Prakash Balerao, a well-known entrepreneur and venture capitalist. Shri Bhagawat spoke about bringing unity by accepting diversity. Diversity is to be accepted, not just tolerated. This is what Bharat (India) stands for . seeing diversity as the expression of unity. He continued, Hindus should lead by example. There comes our duty. Many Indians living abroad have asked me what India expects of them. India does not expect anything of you for India. She is capable of managing herself. 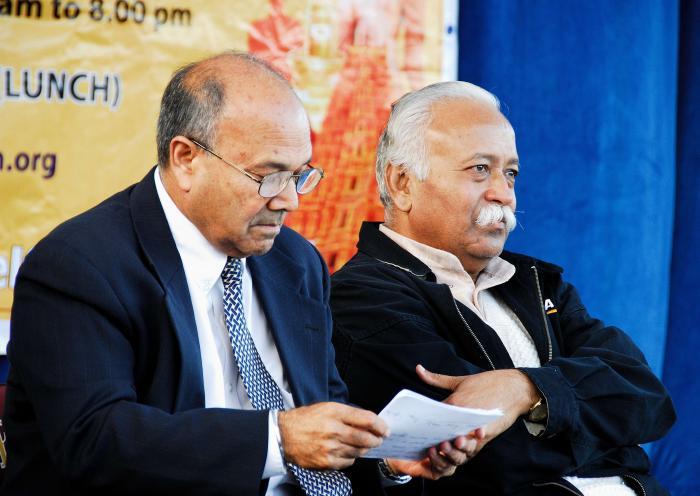 But one thing that is expected of the Diaspora living abroad is – you are the cultural ambassadors of India. You must live up to that. You must show to the world unity in diversity. He also spoke about how happy he was to come to the USA . the country that is a beacon of hope and justice. All great achievements have been shown by this country to this world. Bharat (India), through her spirituality has shown the same values that America has freedom, democracy and justice. The world has been shaken by religious intolerance and the resulting effects of terrorism. The answer to this problem can be given to the world by these two great nations together. They have to come together, stay together and work together to address this issue. 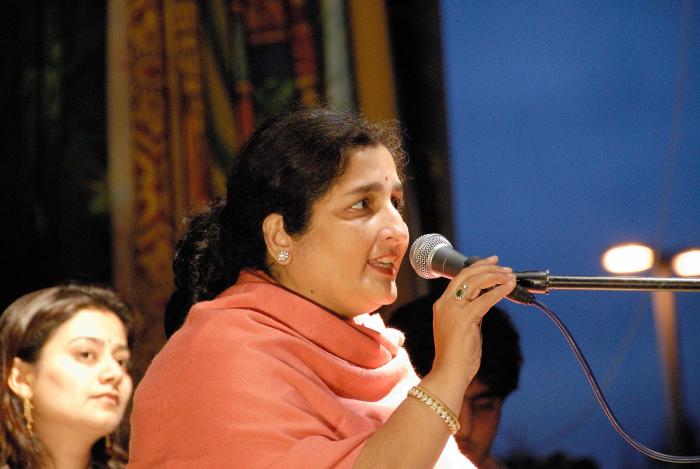 The grand finale occurred when Smt. Anuradha Paudwal, enthralled the audience with a magical evening of devotional songs. She ended her session by singing the Indian national song, Vande Mataram, a song in praise of Mother India.

Hindu Sangam was an event that was brimming with overwhelming enthusiasm, excitement and emotion. This grand cultural display certainly cast its spell on the bay area on September 9th after five long years. Not only did it charge up those taking part to live the message of .unity in diversity, but it also put on display the elements of the grand Indian culture that has guided human civilization since time immemorial.