Tri-State Hindus come together for Hindu Sangam in New Jersey 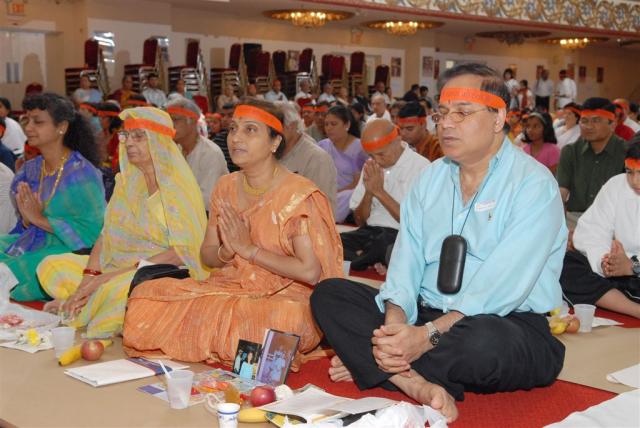 Edison, NJ – September 18: – The Hindu Sangam a grand cultural festival organized by the Hindu Swayamsevak Sangh(HSS) in New Jersey was a runaway success with over 1,000 people participating in the event. The event was organized as a culmination of the birth centenary celebrations of Shri M.S. Golwalkar (Guruji), the second head of RSS. The event started with a Samuhik Ganesh Puja wherein hundreds of families performed Ganesh puja together to seek blessings from the God who removes obstacles. According to the Keshav Dev, General Secretary of New Jersey, “HSS has designed this Ganesh Puja in a children friendly way so that the future Hindu generations understand the essence of the puja and its importance; after all they are the torch bearers of our culture and tradition”. Ganesh puja culminated with the participating families performing a Samuhik Aarti to Lord Ganesha.

During the Hindu Sangam, HSS also showcased their 31 poster exhibition on Hindu Culture and the Dharmic Traditions of India. The exhibition gave a glimpse of the Hindu contributions in various areas like Astronomy, Mathematics, Metallurgy, as well as touched on topics such as Yoga, Ayurveda, Cosmic Rhythms and Hindu Women, . Speaking on inauguration of the exhibition Sarang Rastogi, said “We all say that our Hindu ancestors contributed a lot to various areas of science & technology and culture but most of us do not know the specifics of those contributions. This poster exhibition gives a glimpse of our ancestor’s contribution in various fields of science and culture. This exhibition will help to educate people of all backgrounds and ages on the immense contributions Hindus have made in the world”. 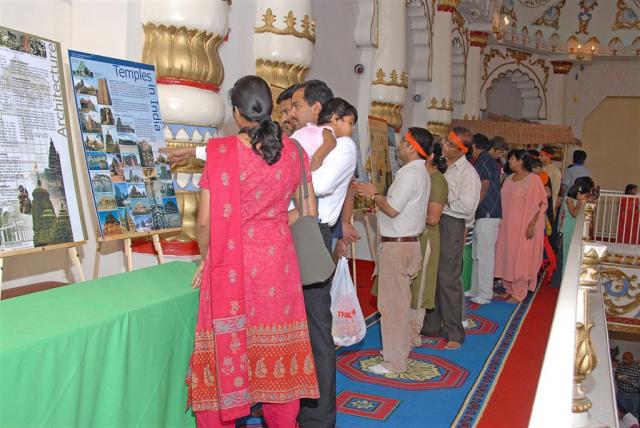 Introducing Hindu Swayamsevak Sangh, Shri Yelloji Rao Mirajkar, said HSS is Pan Hindu social and cultural organization that aims to organize Hindus to preserve, practice and promote Hindu ideals and values through its weekly gatherings called Shakas. HSS has over 100 shakas across the United States. The weekly programs in the shakas consists of both physical(Yoga, Games etc) and intellectual activities(Discussions, lectures, workshops etc) aimed at building the individuals character, leadership ability, and imbibing a sense of selfless service among Swayamsevaks and Sevikas (male and female volunteers) so that they can better serve the society. During the Guruji centenary celebrations HSS organized various outreach activities like Kaun Banega Ramayan Expert(a Ramayan contest for kids) in which 3000+ kids participated, Exhibition on Dharmic Traditions and Hindu Contributions, Lecture tours by eminent personalities and finally Hindu Sangams across United States. In past 2 weekends, over 25000+ people participated in 6 Hindu Sangams organized in the Bay Area, Los Angels, Tampa, Atlanta, Boston and New Jersey.

The Cultural Program started with Ganesh Vandana in Bharatanatyam composed by Roopa Nayak, Reading, PA. The dance item was on “Nagendra Haaraya” composed by Adi Sankaracharya; choreographed by Shridhar Shanmugam of the Arch Theater Production. Manthan a group of physically challenged girls from Gujrat performed a beautiful Bamboo Dance. The girls from Manthan group got a well deserved standing ovation.

Children from various Balagokulams, weekly shakhas for kids, also exhibited their talents. They performed Surya Namaskar a set of Yoga postures for all-round health. They also performed various yoga asanas. This was followed by Ghosh (an Indianized version of band) and a beautiful dance using Laziams by 6 young girls. The HSS volunteers played various compositions on Vamshi(Flute), Shankha(Bugle) and Anak(Side-drum).

The chief guest of the program was Poojya Swami Dayanand Saraswati, head of Arsha Vidya Gurukul. Speaking to a crowd of over 1,000 people Swamiji said the situation in India is encouraging and discouraging. The economy is encouraging due to the efforts of the previous governments. The discouraging thing is that we don’t have well wishers of Hindu Dharma in government. Hindu Dharma can survived with its own steam for many centuries without any support. Now-a-days organized institutions with governmental support are working against Hindu Dharma. 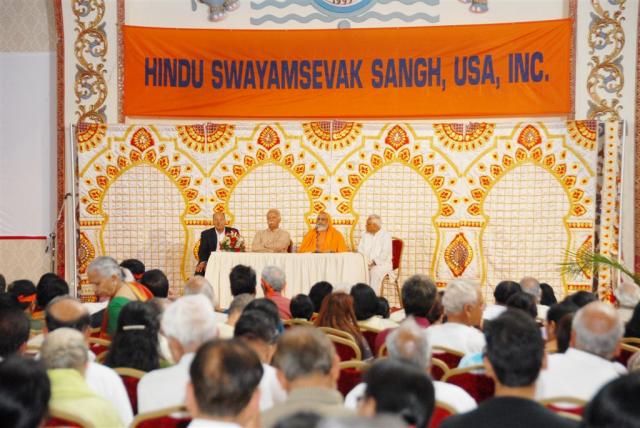 The recent Tirupathi (a symbol of Hindu Shradda and fervor) incident is a glaring example of the evil designs of these forces. The Andhra Pradesh government issued a notification stating that only two hills out of seven belong to Lord Venkateshwara and the government would like to develop remaining five for tourism (Does Tirupathi need any more tourism as more than 100,000 people visit Tirupathi every day). In a thundering voice Swamiji had said that, all the saints who had met to discuss this problem; decided “Enough is enough”, Hindus will not tolerate this attack on their most revered place of worship. The government had to bow down in front of the United Hindu voice and issue a new notification stating all the 7 hills belong to Lord Balaji and the government is ready to give more land beyond the hills if the temple demands. Such is the power of Hindu unity.

Swamiji urged all the Hindus to work to protect and promote Hindu Dharma. He compared the situation to that of a deer. The deer being a vegetarian not only needs to feed itself but also survive from carnivorous predators. Similarly, Hindus should not only follow the dharma but also survive attacks from these carnivorous institutions. 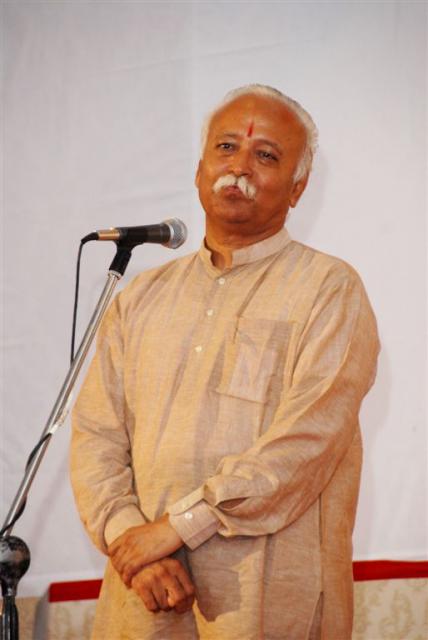 The keynote speech on this occasion was delivered by Maananeeya Mohanji Bhagwat, General Secretary of RSS. Mohanji asked the assembled Hindus to give a keen thought to what Swamiji had said earlier. World over we have seen that the method of bringing Unity(Oneness) by force has failed miserably. It is only the Hindu thought which believes in ‘unity in diversity’. Mohanji reminded that the power of Hindu unity was demonstrated in case of Tirupathi incident wherein the anti-Hindu forces had to beat a hasty retreat.

Mohanji urged that time has come for all the Hindus world over to organize themselves “Hindavah Sodarah Sarve” (all the Hindus are brothers). Hindu values are human values and hence we should unite, not to conquer the world but to sustain it. Hindus who are the cultural ambassadors abroad should lend a helping hand to the Hindus brothers in Bharat who have shouldered a big responsibility of fighting the anti-Hindu forces. Mohanji recalled Shri Aurobindo’s quote that “Sanatan Dharma will rise” and urged all the Hindus to keep courage against all odds and apply themselves to protecting and promoting Hindu Dharma, the sooner the better.

The program ended with the melodic rendition of Vande Mataram.