Yoga is an invaluable gift from India’s ancient tradition. Yoga embodies unity of mind and body, thoughts and actions. Yoga is not just about exercise but it’s a way to discover the sense of oneness with yourself, the world and the nature.”- Excerpt from P.M Shri Narendra’s Modi’s speech at 69th session of UN’s general assembly. Recognizing Yoga’s universal appeal, on 11 December 2014, the United Nations proclaimed 21 June as the International Day of Yoga by resolution 69/131.

Hindu Swayam Sevak Sangh (HSS) branch of the Contra Costa Region organized a community yoga event to celebrate International Day of Yoga (IDY) on Sunday, June 21, 2020 at 4 PM PDT. Communities across the county participated, and over 300 people attend this virtual IDY event. HSS volunteers reached out to various communities in Tri-Valley region for event’s preparation. The program started by reciting Patanjali Sutra written by sage Patanjali, the father of Yoga who gifted Yoga to this universe, followed by Guru Ashtakam, a prayer that praises and gives gratitude to the Guru. This was followed by formal inauguration of the program by Prof. Ved Nanda, President of HSS Americas by lighting of the lamp and a short welcome note welcoming all participants and honorable guests Mr.David Haubert, mayor of Dublin City, Mr. Bob Woerner, vice mayor of Livermore City and Ms.Kathy Narum, vice mayor of Pleasanton city. In his welcome note, Prof. Ved Nanda reiterated the importance of IDY to bring awareness among all communities around the world to impress upon benefits of regular practice of yoga in our daily life.

Followed by this was a live demonstration of Yoga and Pranayama by Yoga certified HSS volunteer Mrs. Smita Kinhikar. The audience participated and enjoyed this interactive session by learning several breathing and mind relaxation techniques. This was followed by a short introduction video on HSS and presentation by Mr. Vasanth Shetty, Director of HSS Contra Costa Region. Topics covered in this brief presentation were the regular community yoga events conducted by HSS, food drive, fund raiser, hot meals, food delivery for seniors, facial mask donations hospital and first responders and other numerous community services over the past 3 months of COVID-19 situation. Following this was a keynote speech by Ms. Ashwini Supur, an Executive Director of Yoga Bharati, which is a local nonprofit Yoga training & Yoga Therapy organization. During her talk, she went deep into the meaning of yoga and its importance in modern world. Mrs. Surpur said, “regular practice of yoga will help you

to train your mind by removing negativity and creating oneness with the universe. It makes you skilled in your action by managing your emotions efficiently along with mind-body alignment.”

The next segment included brief talks by honorable guests from the Cities of Dublin, Livermore and Pleasanton. Mr. Woerner, vice mayor of Livermore presented the Proclamation by the City of Livermore on the occasion of IDY and also thanked HSS for its wonderful community services. Mr. Woerner said, “the session was very informative and inspirational. I am going to practice yoga, myself, more like my wife Nova Starling.” 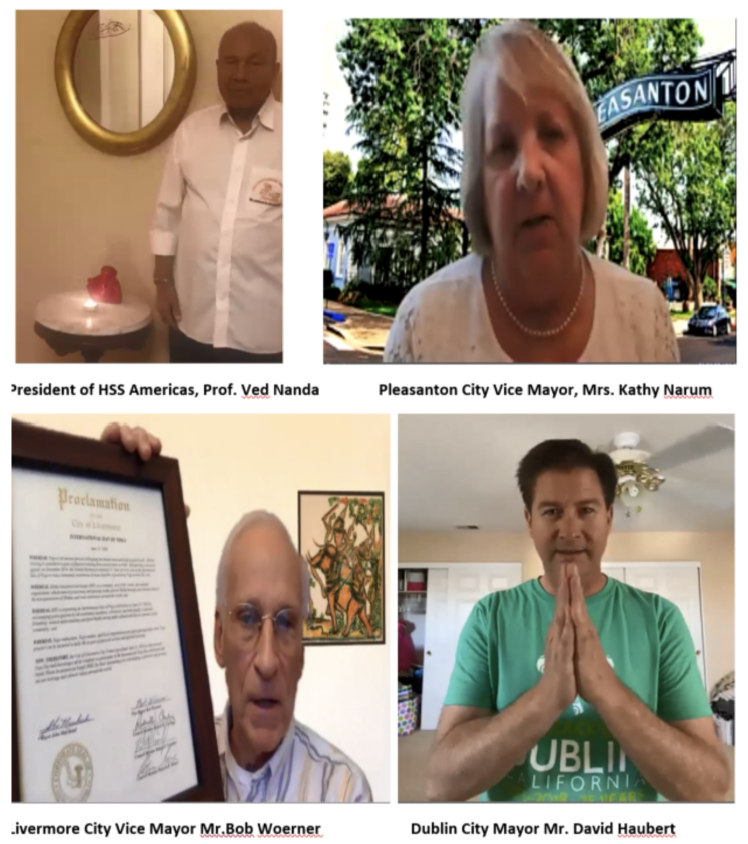 This was followed by a short speech by the mayor of Dublin City, Mr. David Haubert. Mayor Haubert said, “we welcome the thoughts and prayers and spirituality that yoga brings to the diverse community of Tri-valley.” He praised HSS for its community service and said that, “HSS is amazing, we appreciate and thank you. We are a better community because of you.”  This was followed by a short speech given by Ms. Kathy Narum, the vice mayor of Pleasanton. During her speech Ms. Narum said, “It is important in today’s world to promote an understanding of Hindu culture and heritage. Today it is more important than ever to view the world as one family. It is essential for fostering world-wide peace.”

The program was concluded with a prayer for mother nature and word peace in the Sanskrit language, one of the oldest languages in the world. We are proud and dedicated to carry Yoga’s legacy and use it as tool for everyone’s well-being across the globe.