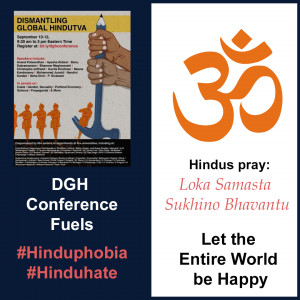 HSS USA rejects all insinuations and baseless allegations published in a recent article in “The Guardian” newspaper, on the topic of the Hinduphobic conference ominously titled “Dismantling Global Hindutva”  HSS USA has a long history of community service, but unfortunately is often the target of vile attacks by fringe groups that seek to dismantle civil rights of ordinary Hindus in America. This article is no exception to the pattern of anti-Hindu hate written on the basis of unsubstantiated suppositions.

HSS reiterates its firm and unwavering commitment to freedom of speech, and welcomes a civil debate or effort to understand Hindutva in its myriad dimensions.  HSS also unequivocally condemns any direct or indirect threat to harm anyone, including the open abuse of Hindu community members by the event organizers and their proxies.  It is noteworthy that no attempt was made to contact us by the reporter, thereby denying a fair  opportunity to present our views on the matters raised in the article.

The article mentions the grassroot email campaign and tries to portray it in a negative light by describing it as an action by fringe groups. It is a legitimate exercise of the right to free speech by concerned parents, who feared attacks on their children due to the seeming call for violence (“Dismantle”) by the organizers and supporters of the online event. We appreciate that more than a million emails were sent to the universities by the Hindu-American community and only willfully ignorant people can call that as an action by a fringe group.

HSS USA is a US based 501.3 (c) non profit organization. We strongly object to the insinuation by the reporter of split loyalty by Hindus-Americans, with the mention of links to India-based social organizations. Our commitment to serve the society we live in is according to the Hindu values of ‘Vasudhaiva Kutumbakam (Whole World is One Family)’ that we practice in our daily lives.

This link documents the reality of hate faced by Hindu-Americans which we hope The Guardian’s editorial board and its reporters uses to educates itself.