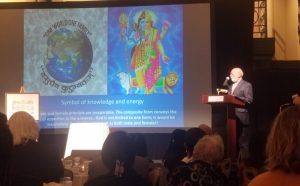 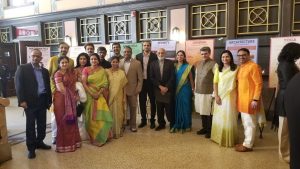 On March 12, 2022, Dr. Vimal Patel, President of the Hindu Swayamsevak Sangh (HSS), Indiana Chapter, was honored as the Interfaith Ambassador of the Year at a celebratory banquet with over 350 people in attendance including the Mayor of Indianapolis, at the historic Union Station in Downtown Indianapolis. The attendees were treated to a delicious Indian vegetarian meal and entertainment which reflected the faith and culture of the person being honored. The Center for Interfaith Cooperation gave the award, and Dr. Patel was the first Hindu to have received that award.

In his acceptance speech, Dr. Patel brought out some central messages in different faiths to live in a harmonious world. Love Thy Neighbor could well be what a Hindu would say, ‘Vasudhaiva Kutumbakam‘ – the whole world is one family. Growing up, he said, Hindus are taught the Upanishadic statement – ‘Ekam Sat, Vipra Bahudha Vadanti’ – meaning, Truth is One, God is worshiped in different names.

The 82-year-old Dr. Patel, an emeritus of the University of California, Davis, received his Ph.D. in Nutritional Biochemistry. He has been a Hoosier for over 50 years, and one of the earliest Hindus settled in the Indianapolis area. He is a founding member of India Community Center, the Geeta Mandal of Indianapolis, and a founder of the architecturally aesthetic Hindu Temple, known as the Hindu Temple of Central Indiana He is a board member of the Hindu University of American Orland, FL.

He has been a pioneer in the body-mind medical field. He received the Ayurveda Ratna, from Allahabad University, in 1996, where he studied under practicing Ayurvedic Physicians. Dr. Patel was an Associate Professor of Neuropathology at the Indiana University School of Medicine. He served as Director of Neurochemistry Diagnostic Laboratory at the Department of Pathology for 34 years, from 1970 to 2004. During his active career, he established the Indiana Institute of Integrative Medicine and served as its Director and President.

In his post-retirement period, he is actively engaged in Interfaith dialogues representing Hindu Dharma with many different organizations, including schools and churches, and was a past board member of the Center for Interfaith Cooperation.