Hinduphobia in City of Manteca 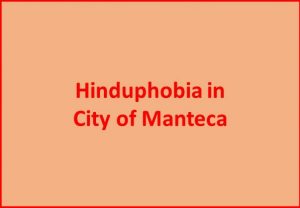 Hindu Swayamsevak Sangh USA (HSS) condemns the rescinding of the proclamation for “Health for Humanity – Yogathon 2022” by the City of Manteca, California.

In a report released in July 2022, researchers at Rutgers University concluded that Hinduphobia has a strong and growing online presence and has been increasing in recent years[i]. Ironically, around the same time, the City of Manteca, in a last-minute special meeting, voted to rescind the proclamation awarded to Hindu Swayamsevak Sangh on the occasion of “Health for Humanity – Yogathon 2022”.

This Hinduphobic action by the City has caused angst and fear among the Hindu Americans who live in and around the City.

Based on Hindu ideals of “serving humanity is serving divinity,” the San Joaquin County unit of HSS-USA has for years served the community through various projects, including

HSS follows this model of community service by partnering with several local governments, schools, and businesses, as well as nationally with relevant federal authroities such as Federal Emergency Management Agency (FEMA).  Apart from various community services, the HSS has organized an annual Yogathon – Surya Namaskar Yajna/Sun Salutations, bringing American society together for a healthy lifestyle. Since its inception, participants around the world and in the US from 43 states have actively participated in Yoga centers, community organizations, schools, and colleges. Regardless of individual faiths and beliefs, US participants have collectively performed over four million Surya Namaskars.

Many businesses and community organizations appreciate and promote this annual project. US Representatives have formally recognized it, and other elected officials, including Governors and Mayors, have issued proclamations encouraging citizens to participate. In January this year, over 3,000 students and teachers from numerous schools and 12,600 other enthusiasts participated in the Health for Humanity Yogathon 2022.

Regardless of HSS volunteers’ selfless work within the society, the City of Manteca, California, chose to revisit the proclamation given to HSS in January 2022. Neither the Mayor’s office nor the City Council formally notified HSS despite keeping the HSS on their public discussion agenda. However, after learning about such a proposed meeting, the HSS unit of San Joaquin County reached out to the Mayor and the councilors twice with all details about HSS and its service activities and requested them to reconsider the planned unfair rescinding of the Yogathan proclamation.

Ignoring the local volunteers’ request and without due diligence, the City of Manteca rescinded the proclamation. They took this decision based on misunderstanding and on false allegations, unfounded facts, hearsay, and innuendos by vested interests who have a documented history of speaking against Hindus, Hindu Americans, and India. The local community members are hurt by this decision and the process to take it, ignoring diversity, equity, and inclusion of the local minority Hindu communities despite their local efforts to work with the broader American society.

Such decisions by the City promote hate and put the minority Hindu community in danger. This potentially encourages discrimination and attacks on businesses and places of worship owned by Hindus.

We hope better sense prevails and the City of Manteca will reconsider its position and do the right thing by encouraging the minority Hindu community’s role as part of the Civic engagement.